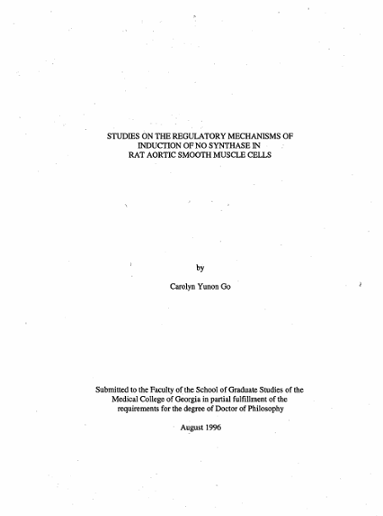 The induction of NOS involves a growing number of stimuli which include a variety of substances, namely bacterial endotoxin (LPS), cytokines (e.g. IL-1, TNFa, IFNy), cAMPelevating agents, UV light, ozone, trauma, microbes, etc. (Nathan and Xie, 1994). In this study, we report the induction of NOS by protein synthesis inhibitors in rat aorti_c smooth muscle cells (RASM). We hypothesized that protein synthesis inhibitors increase iNOS mRNA stability m:id c~use the depletion of protein repressor IKB a, resulting in the activation of the transcription factor NF-KB and subsequent iNOS gene expression. We tested our hypothesis by · determining the effects of two protein synthesis inhibitors, namely cycloheximide (CH) and ~nisomycin (ANI), on iNOS function and gene expression in R t\SM. We observed the absence of NMMA-sensitive and L-arginine-dependent NOS activity. However, in the presence of either lOμM CH or 250ng/ml ANI for 24 hours, there is significant iNOS activity, as determined by cGMP accumulation in the presence of IBMX, a phosphodiesterase inhibitor. The increase in cGMP levels is sensitive to NOS inhibition by LNAME and this inhibition is reversed by the addition of L-arginine, but not D-arginine. The response to an exogenous NO donor, SNP, is not altered after prolonged exposure to either protein synthesis inhibitor. These results suggest that the cGMP production is due to iNOS activation by CH or ANI. In the presence of a known iNOS agonist e.g. LPS, IL-1~ or TNF-a, iNOS activity is superinduced by CH. LPS-induced NOS activity which peaks rn·ter 6 hours is inhibited by CH, however subsequent LPS-induced NOS (>6hrs) is superinduced after prolonged exposure to CH. In the presence of increasing concentration of CH, peak iNOS activity was obtained at lOμM CH, whereas reduced activity was obtained at higher concentrations (>50μM). A similar biphasic curve was observed in the additional presence of LPS (lO0ng/ml), however, the levels were 100-fold higher than with CHstimulation alone. To determine whether protein synthesis is altered by CH, total methionine incorporation was measured. A dose-dependent attenuation of protein synthesis was observed, concommitant to a biphasic increase in iNOS activity in response to increasing CH concentration. The additional presence of LPS did not affect CH-inhibition of protein synthesis. It was also observed that maximum inhibition of protein synthesis is reversible within 2 hours of removal of CH. To determine whether cell proliferation was affected by CH, total cell number was determined in the presence or absence of CH, either in· serumcontaining or serum-free medium. There was no significant changes in cell number within 24 hours of NOS. induction. To investigate the mechanisms of NOS induction by CH, we determined whether CH-induced iNOS activity or superinduction of LPS-induced iNOS activity were dependent on continuous transcription. In the presence of actinomycin D, a transcription blocker, the CH-induction and superinduction of iNOS activity were significantly attenuated, confirming the hypothesis that CH-mediated increased iNOS activity requires riew transcription. To directly investigate the mechanism of CH-induced iNOS activity in RASM, we determined iNOS protein by western blot analysis and mRNA levels by northern blot and RTPCR analysis. By western blot analysis, we observed a 130-kDa size protein, representing iNOS, only after a 24-hour exposure to both CH and LPS, corresponding to superinduced iNOS activity, as determined by radioimmunoassay of cGMP. UtHizing RTPCR, after .12 hours ~xpo~ure to l0μM CH, there is-significant iNOS mRNA. At this time, LPS~induced mRNA is minimal, however, in the combined presence of LPS and CH, relative mRNA levels are significantly increased. Comparison of relative iNOS mRNA half-lives induced by CH, LPS or combined CH and LPS, showed that in the presence of LPS alone, iNOS mRNA significantly decayed within 1.5 hours, in contrast to iNOS mRNA in the presence of CH and combined LPS and CH which were not timedependently reduced by inhibition of transcription. These data strongly suggested the presence of a labile protein involved in the regulation of iNOS transcription. To identify this putative labile repressor protein, we investigated the time-dependent effects of CH on the major inhibitory protein subunit of NF-KB, i.e. IKB«. CH reduced IKBci protein levels, concommitant with a delayed increase in its phosphorylated isoform, observed as the slower migrating species during electrophoresis. In the additional presence of protease inhibitors (to block the breakdown of IKB), the CH-mediated effects on IKB« were prevented. Moreover, induction of NOS activity by CH was dose-dependently attenuated by protease inhibitors. To determine whether the CH-mediated effects on IKBa activate NF-KB, nuc.lear extracts from cells treated with CH, LPS or combined CH and LPS were analyzed by electrophoretic mobility shift assays (EMSA). There was a significant shift in radiolabelled NF-KB groups stimulated by CH or LPS. Activation of NF-KB in the presence of both stimuli was enhanced, while there was no significant shift detected in unstimulated groups. Ir contrast, a strong basal AP-_1 activity was detected in the presence of radiolabelled AP-1. CH-stimulation increased: basal AP-1 activity. This correlated with a time-dependent increase;dn JUN, but not FOS, protein levels~ These data strongly support the hypothesis for a modulatory role of -labile repressors on iNOS gene expression by CH. In conclusion, results from the present studies strongly support the hypothesis, that CH-mediated iNOS g,me expression and superinduction of LPS-induced NOS is due to both iNOS mRNA stabilization and depletion of IKBa, subsequently leading to NF-KB activation and iNOS gene expression in RASM.