Pulmonary vascular response to hypothermia in the isolated canine lung 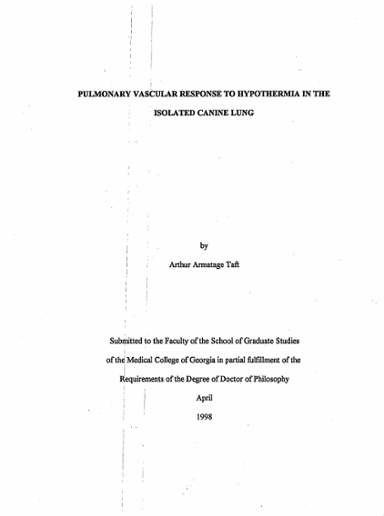 Hypothermia is frequently :utilized as an adjunct to surgical procedures and is widely employed in organ preservation for transplantation procedures. Yet, surprisingly little is known as to how hypothermia alters lung vascular resistance or reactivity. This study was designed to investigate the effect ofhypothermia on the lung vasculature and the role of blood viscosity and endothelium-derived vasoactive substances in mediating or modulating the pulmonary vascular responses to hypothermia. The right lower lung lobe was excised from pentobarbital anesthetized dogs (15-20 kg), cannulated, and perfused with autologous blood at a constant flow (8}±.03 ml/min/g lobe weight) and venous press~re (4.0±0.4 em H20). Arterial, airway, andlvenous pressures were continuously monitored. After stabilization at , I . 37°C, either saline (cdntrol, ~-= 6), 50 J.LM nordihydroguaretic acid ~GA; a lipoxygenase inhibitor, n = 6), 45 J.1M meclofenamate (MECLO; a cyclooxygenase inhibitor, n = 6), 2 mM nitro-L-arginine methyl ~ster (L-NAME; a nitric.oxide synthase inhibitor, n = 6), 45 J.lM :MECLO plus 2 mM:4-NAME (MECLO + L-NAME; n = 6), or 1 mM tolazoline (TZ; an aadrenergic receptor thocket, n = 6) was added to the venous reservoir. In another group (n = 6) blood viscosity ~as lo~ered by removing red blood cells to achieve a hematocrit of 21% versus 43% for the 1 cont~ol.groQp. In each group, pulmonary vascular re~istance was partitioned ·into vasfular sFgments using arterial, venous, and double vascular occlusion techniques. To assess vascular reactivity in each group, 50 J.lg 5-hydroxytryptamine (5-HT; serotonin) was injeLed il).to the arterial cannula and double vascular occlusions were performed at the peak 10f the ,pressor response. The temperature ofthe blood was gr~dually_ , varied systematically, 1ither 13 o, 19 o,. 25 o, 37 oc or 25 o, 19 o, 13 o, 37" C. Aftet 20 rirlnutes at each temperature, vascular ·occll;lstons were p~rfonned followed by a 5'!'HT challenge. Resistance increased !in all Lscular segments except large arteries, as blood temperature deceased. With hypo~ the average venous. resistance increase was nearly twice that in the arterial segments .. Th~·administrati~n ofNDGA, TZ, .or L~NAME dtd not alter the increase in vascular res~stance;to hypothe~a relative to control lobes. Altering viscosity had minimal effects .on th1 resistfmce incre~se during hypothemiia. MECLO increased vascular resistance iri large artedes an4Jarge veins (P<O. 05) at all temperatures.· MECLO did not alter the. arterialvas~ar re~istanc~ increase. to hypothermia relative to the .control group. Whereas venous .resistance increased :at 25 o C relative to 37 o C in the MECLO group, unlike control lobes, venous res~stanc.e di~ not progressively increase as temperature declined further. MECLO + L-NAME diminished the arterial resistance increase. and abolished the venous vascular resistance intrease ~o hypothermia .. In. control lobes, the vascular pressor response to 5-HTat 25·oc wa~ incr~ased i~ venous segments relative to 37°C (P<0.05) but not in arterial segments. At 13 QC, the venous pressor response to 5-HT was not different in control lobes while the arteri4 presstr response was diminished relative to 3 7 o C. TZ .diminished the pressor response. to 15-HT I at all temperatures. Neither L-NAME, NDGA, nor lowering viscosity altered the mag~tude of the pulmonary pressor .response to 5-HT at any . ' . hypothennictemperathrerrel~tive to. control lobes. Whereas :MECLO markedly enhanced the pressor re~ponse to. 54HT at all temperatures (P<0.05), it did.not alter the pattern of changes in vascular reactivitY to 5-;HT relative to control lobes. MECLO plus L-NAME· did not change vascular ,vity drng hypothermia relative to t)lat in lo.bes treated with MECLO alone. Whether hypothermh11 affects the basal or stimulated release of nitric oxide (NO) or prostacyclin (PG~) wL inJstigated in bovine pulmonary artery endothelial cells (BP AE). NO production was assaye~ by measuring cG:MP formation from co-cultured rat aortic smooth muscle cells ~SM). BP AE were grown on glass cover slips and RASM were grown in 24 well cul~re pl~tes, both at 3 7 o C. At confluence, BP AE were incubated for 1 hour at 25 o or 37 °-C· before transfer on top ofRASM (maintained at 3 7 o C). The co-cultures were incubated for 15. minutes at either 25°· or ~7°C and subjected to one of the following six treatments: vehicle, 1 o·5M bradykinin (BK),. 1 o·5M 5-HT, 10-4M sodium nitroprusside (SNP), 10.5MBK + IO""ML~NAME, or 10-5M 5-HT + IO""ML-NAME, all in the presence of 1 o·3M 3-isobutyl-1:-methyl xanthine (ffil\1X) .to .inhibit cG:MP breakdown. cG:MP was assayed by radioimrpuqoassay (RIA) as· an index ofNO production; H~othermia did not alter basal cG1v.IP accumulation in vehicle treated co-cultures but reduced B~-stimulated cG:MP formation without affe~ingt~e SNP induced increase in cGMP. Formation of cGMP was not affected by 5-HT. My ~ata s~ggests·that hypothermia has little effect ·on basal NO production but diminishes receptor-stim~lated endothelial NO formation. PGI2 release from BP AE was assayed by measuring -6-keto-PGF1ex (6kPGF1ex) formation. At confluence, BPAE were incubated for 1 houri at 25 l or 3 7 o C before being subje.cted to one of the following. six treatments: vehicle, 11·5M Bf 10-5M 5-HT, 10-6M A23187, 10~5 M BK + 45 J.lM :MECLO, or 10-5M 5-HT +45-~:MECI1 LO. After 15 minutes, the medium was aspirated and-assayed for 6kPGF lex by RIA. ~ypotqennia decreased basal 6kPGF lex accumulation in vehicle treated cultures and reduce oth A23187 and BK-stimulated 6kPGF1ex formation but had no effect on the 5-HT induced ~cr4e in 6kPGF lm· These data suggest that hypothermja diminishes basal PG~ producti!)nlas w4 as A23187 and BK-stimulated endothelial cell PGI2 formation, but not s~HT~stimulat~d PGI2 formation. I conclude that the hypothermia-induced increase in pulmoriary vascular listan~ is due, in part, to diminished PGI2, but not to diminished NO i formation. PGI2 appears to modulate the pulmonary vascular response to 5-HT injection at ! I all temperatures but· d0es no~ appear to mediate the alterations in vascular reactivity during moderate to severe h~othetnna in the isolated dog lung. PGI2 activity is demonstrable in large arteries anq vein~,· whereas NO activity can be demonstrated in large arteries. During nonnotherrilia, NO act~Vity is ~pparent in large veins provided cyclooxygenase is concurrently inhibited.