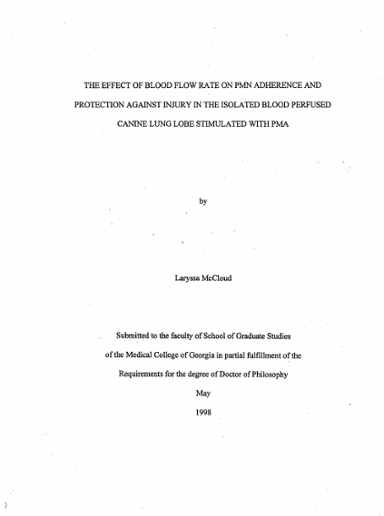 In the lung neutrophil (PMN)-endothelial interactions contribute to the endothelial damage that occurs in many disease states, such as the adult respiratory distress syndrome (ARDS). Current literature states that. PMN adherence is greater at low blood flow rates. How high blood flow rates affect PMN-mediated injury in the lung has not been investigated. This study was designed to determine the effects of increased blood flow on the ability of phorbol myristate acet~te (PMA) to cause lung injury in the isolated canine lung lobe and on the ability of agents to protect against this injury. Injury was assessed by examining luminal endothelial bound angiotensin converting enzyme (ACE) activity, pulmonary vascular resistance (PVR), pulmonary artery pressure (Pa), double vascular occlusion pressure (Pdo ), and the capillary filtration coefficient (Kr). PMN sequestration was measured using circulating white blood cell· counts [WBC] and differentials and 51Cr labeled PMN retention by the lung~ Lung lobes were perfused at low flow (LF, 0.599±0.001 L/min) or high flow (HF, 1.185:f::0.004 L/min) and divided into four groups. Group I, LF PMA, Group II, LF Control, Group III, HF PMA, and Group IV, HF Control. Groups I and III received PMA (1 o·7M) while Groups II and IV were treated with the PMA vehicle. PMA decrea~ed ACE activity and [WBC] at both flows while Pa, PVR and Kr were increased. PMA ( 'L caused lung injury independent of blood flow rate. Isoproterenol (ISO) has been shown to protect against some forms of lung injury. To study the effect of flow rate on the ability of ISO (10-5M) to protect against PMAinduced injury, lobes were perfused at either 0.603±0.003 or 2.015±.0.064 L/niin ~d .. were pretreated with either saline (Group I, LF Vehicle + P MA) and (Group II, HF Vehicle + PMA) or ISO (Group III, LF ISO + P MA) and (Group IV, HF ISO + P MA) for 20 min before PMA. After PMA ·Group I and II lobes showed significant decreases in ACE activity and increases in Pa and PVR. Kr measurements after injury. could be completed in only three of the six lobes in Group II due to severe edema. Pa and PVR increased after injury in Group III lobes. In Group IV lobes ISO protected against the increases in Pa and PVR and decreases in ACE activity but caused an increase in Kr that was further increased after PMA. Thus, ISO protected against endothelial ectoenzyme dysfunction and partially protected against hemodynamic changes after PMA in lungs perfused at high blood flow rate. Lobes perfused at a low flow rate were not protected from the hemodynamic effects of PMA by ISO pretreatment. Pentoxifylline (PTX) is another agent reported to provide protection against various forms of lung injury. To study the ability of PTX (10-3M) to protect against PMA-induced injury, lobes w~re perfused_at low flow (LF, 0.601±0.002 L/min) or high . flow (HF, 1.170±0.005. L/min) and divided into four groups. Group L LF PTX Control, - . . ~ ·, Group II, LF :eTX + PMA , Group Ill, HF PTX ~ontrol, and Group IV, HF PTX + PMA. Lobes were treated with PTX 30 min before PMA or vehicle. [WBC] and blood smear differentials were performed. PTX increased [WBC] in all groups but did not change any other measured parameters. In the presence of PTX, PMA resulted in no changes in ACE activity, Kr or hemodynamic parameters. PMA decreased [WBC] (l><O.OS) in both the presence and absence of PTX. PTX provided protection against PMA-iliduced l~g injury at both flow rates. The injury to PMA was found to occur in lung lobes perfused at both hig~ and low flow. PMA increased Pa, PVR and ·the ~r while decreasing circulating WBC counts, circulating PMN counts, Ama/Km, and% metabolism of 3H~BPAP. Although the injury to PMA was found to occur independently of flow. rate, the ability of ISO to protect · against PMA-induced injury was foun,d to .be greatest during high- flow perfusion. At high flow, ISO completely protected against increases in Pa, Pdo and PVR while attenuating the increase in the Kr. Plasma cAMP lev~ls were also significantly increased by ISO pretreatment and were not alter~d .by PMA in the high flow group. At low flow ISO did notprevent PMA-induced increases in Pa, Pdo or PVR. ISO did however protect . ' . . . ' against increases in the.Kr and tended to increas~ plas.ma cAMP_levels. Unlike ISO, PTX provided protection against PMA.,.induced lung injury independently of flow rate. During both high and low flow perfusion PTX protected against PMA-induced increases in Pa, · PVR and ~e Kr'Yhile protecting against decreases in ACE enzyme activity. PTX caused the release of WBC from the lung significantly increasing both total WBC and PMN counts. PTX did not prevent the sequestration of PMN or the release of superoxide in response to PMA.