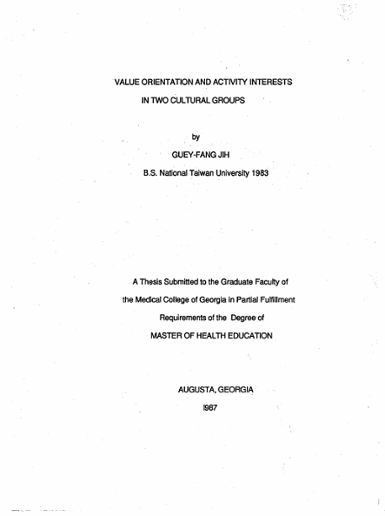 A study of value· orientation in Ufe goals and activity interests was conducted to explore how culture influences thes_e two variables. The relationship between value· orientation and activity interests was also investigated to explore the theoretical framework of human occupation. The human occupation model borrowed the general system theory and assumed that t Man as an open system, interacted with the environment through a process of input, throughput , output and feedback. The environment is physical, social and cultural phenomena. Output information results in purposeful occupation or human occupation. A descriptive survey was designed using two questionnaires to measure the value orientation and activity interests in two cultural g~oups, American occupational therapy students at the Medical College of Georgia, Augusta, GA, U. S. A. and Chinese occupational therapy students at the National Taiwan University, Taipei, Taiwan,· R. 0. C .. The questionnaires were translated into Chinese for the Chinese subjects. The California Life Goals Evaluation Schedules was administered to measure the value orientation in life goals. It included 150 statements categorized into 10 categories: esteem, profit, power, fame, leadership, security, social service, interesting experiences, self expression and independence. Matsutsuyu's Neuropsychiatric Institution Interest Checklist was used to measure activity interests which were categorized with the assistance of occupational therapy faculty at the Medical College of Georgia. The 80 activity items were categorized as active, passive, cooperative, competitive, creative, structured, solitary and group activities. A total.of 35 questionnaires was sent out for the Chinese subjects. All of them were returned , but one of them was not completed. A total of 50 questionnaires was distributed for the American subjects. Thirty·questionnaires were returned, 20 of them were completed. ·Data were analyzed using "STATGRAPHICS" computer package. The statistical tests utilized were_ Student's t-test and Pearson product moment Correlations. Findings indicated that the value orientation in these two groups had .statistically significant differences in fame, power, leadership, security, interesting experiences, and independence. But, there were no significant differences in the activity interests except-in the category of structured activities. A further finding was that the American group in this study tended to prefer passive, cooperative, creative and group activities. The Chinese group tended to prefer passive, and cooperative activities and had no significant preferences in creative versus structured and solitary versus group activities. Considering the correlation of value and activity interests in each cultural group, the results showed that there existed some correlations of value and activity interests. These findings did not supp·ort all the hypotheses, but did provide clues of relationship in value and activity interests.