Two Years in the Life of a Nursing Embedded Librarian 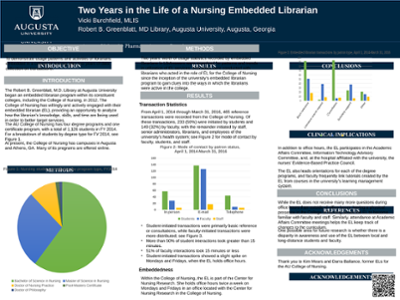 Objective: To demonstrate usage patterns and activities of librarians embedded in a college of nursing after two years of data collection on transactions. Introduction: The Robert B. Greenblatt, M.D. Library at Augusta University began an embedded librarian program within its constituent colleges, including the College of Nursing, in 2012. The College of Nursing has willingly and actively engaged with their embedded librarian (EL), providing an opportunity to analyze how the librarian’s knowledge, skills, and time are being used in order to better target services. The AU College of Nursing has four degree programs and one certificate program, with a total of 1,126 students in FY 2014. For a breakdown of students by degree type for FY 2014, see Figure 1. At present, the College of Nursing has campuses in Augusta and Athens, GA. Many of its programs are offered online. Methods: Two years' worth of usage statistics recorded by embedded librarians in LibAnswers were examined for patterns and trends in utilization of EL services. Interviews were conducted with librarians who acted in the role of EL for the College of Nursing since the inception of the university’s embedded librarian program to gain clues into the ways in which the librarians were active in the college. Results: From April 1, 2014 through March 31, 2016, 465 reference transactions were recorded from the College of Nursing. Of these transactions, 233 (50%) were initiated by students and 149 (32%) by faculty, with the remainder initiated by staff, senior administrators, librarians, and employees of the university’s health system; see Figure 2 for mode of contact by faculty, students, and staff. Student-initiated transactions were primarily basic reference or consultations, while faculty-initiated transactions were more distributed; see Figure 3. More than 50% of student interactions took greater than 15 minutes. 51% of faculty interactions took 15 minutes or less Student-initiated transactions showed a slight spike on Mondays and Fridays, when the EL holds office hours. Within the College of Nursing, the EL is part of the Center for Nursing Research. She holds office hours twice a week on Mondays and Fridays in an office located with the Center for Nursing Research in the College of Nursing. In addition to office hours, the EL participates in the Academic Affairs Committee, Information Technology Advisory Committee, and, at the hospital affiliated with the university, the nurses’ Evidence-Based Practice Council. The EL also leads orientations for each of the degree programs, and faculty frequently link tutorials created by the EL from courses in the university’s learning management system. Conclusions: While the EL does not receive many more questions during office hours than outside of office hours, having a physical presence in the College of Nursing allows the EL to become familiar with faculty and staff. Similarly, attendance at Academic Affairs Committee meetings helps the EL keep track of changes to the curriculum. One possible area for future research is whether there is a disparity in awareness and use of the EL between local and long-distance students and faculty.

Poster presented at at the Medical Library Association Annual Meeting, May 14-18, 2016, Toronto, Canada

The following license files are associated with this item: